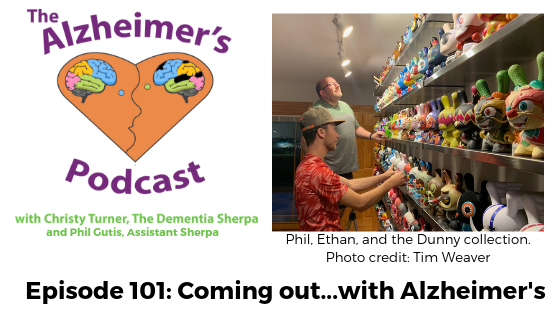 June is Alzheimer’s and Brain Awareness Month, and it’s also Pride Month. That lead Phil Gutis, our Assistant Sherpa, to the idea of doing an episode about coming out…with Alzheimer’s.

One of the things Phil and I talk about a lot is stigma and shame, and how the words we use can help or hurt. Unfortunately, those are issues both the LGBTQ community and the Alzheimer’s and other neurodegenerative disorders community know way too much about from first-hand experience.

As usual, we cover a lot of ground in this episode. But this is how Phil puts it:

“I think if there’s any message from this episode, in my mind, it’s live, it’s tell. Share. Don’t be ashamed. Come out. People have to know. Otherwise, it can swallow you whole. The depression is real. The anxiety is real. There’s only one way of fighting it. And that’s sunshine.”