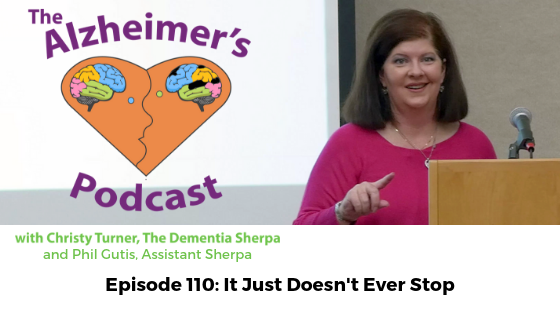 This episode is part two of the conversation Phil Gutis, our Assistant Sherpa, and I start in episode 109: The Randy Rainbow Debacle. That episode gives you the backstory and context to fully appreciate this episode, so if you haven’t already, go check out episode 109 first.

As our Phil Phans know, he’s a columnist for MemoryWell. In his most recent column, Phil shares more of his thoughts and feelings about the Randy Rainbow-related incident that sparked these two podcast episodes, plus he adds a sort of post script to the story that gave me a great big smile. So, definitely go check out Phil’s column on MemoryWell.

Meanwhile, in this episode, Phil says we go “off the rails.” I prefer to think of it as a little color commentary. Where else can you tune in to get an insider’s thoughts on living with a neurodegenerative disorder, plus catch the host do a weird yet oddly appropriate mash up of Hank Kingsley and Joey Tribbiani–and then have it all tied together with a big purple bow at the end? 😉