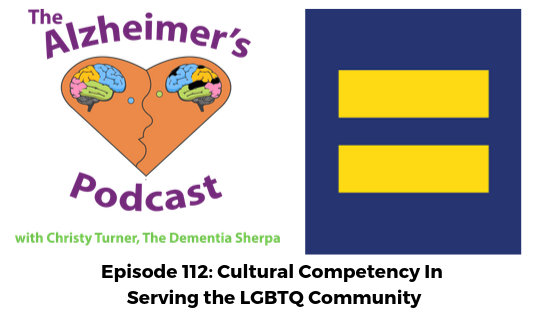 People with Alzheimer’s and other neurodegenerative disorders are typically portrayed in media as elderly white people. On television, it’s often a white man in the emergency department, accompanied by his wife, sometimes with a frantic son along for the ride.

What most folks don’t realize is that the African American and Latino communities are significantly harder hit by Alzheimer’s and related neurodegenerative disorders.

Women are much more likely to not only be the primary care partner, but also to go on to develop one of these disorders. Younger people, like Phil Gutis, our Assistant Sherpa here on The Alzheimer’s Podcast, can be diagnosed.

When media depicts or represents only one type of person or family, we know, logically, we’re missing the larger fact-based picture. It’s important for providers to appreciate and understand who we’re serving, which definitely includes historically marginalized communities. And that leads me to the community we’re discussing today: the LGBTQ community.

I was lucky enough to land an expert guest, Jerry Mallicoat, who explains what, exactly, the terms cultural competency and cultural humility mean, and why it’s vital providers consistently demonstrate both. Although Jerry’s focus is on the LGBTQ community, I think the broader message is applicable to every marginalized community and person.

Mentioned In This Episode