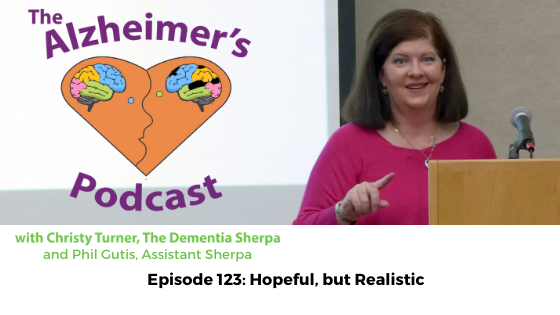 At one point, Phil refers to protesters, and who he’s talking about are the armed white people who showed up at statehouses wanting to get a haircut, go to the movies, open up the economy, that sort of thing.

So, I don’t want there to be any confusion because of when this episode is being released (in early June) about who Phil is talking about.

One other warning: this episode, I think, really reflects the anger and frustration that Phil and I were feeling in mid-April. Many of you have told me how much you appreciate me putting a positive message out into the world. But I think there’s also a time to not only have righteous anger but to share it with the rest of the world.

Finally, unlike virtually every other episode of The Alzheimer’s Podcast, this episode is marked “E,” because I use the s-word, once.

That's a long time to struggle with trial and error!

If you have questions or comments for Phil (or me), please let us know! We love hearing from you 🙂