Episode 90: The Inside Scoop with Phil Gutis, a Man Living with Alzheimer’s Disease 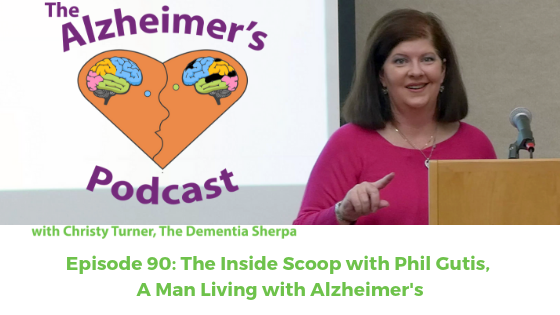 Welcome to Episode 90 of The Alzheimer’s Podcast, where we’re all about bringing The Good Stuff (that’s respect, kindness, love, empathy, and compassion) for people living with dementia, their families, and the professionals who support them. I’m Christy Turner, AKA The Dementia Sherpa. I’ve enjoyed the privilege of working with over 1,500 people living with dementia and their families so far, including multiple experiences in my own family.

Hello and welcome! As I shared on the Dementia Sherpa blog last week, I had a spectacular Spring Break 2019. It’s now been one week since the Inaugural Connecting Circles of Care and Building Bridges of Hope Dementia Cruise & Conference completed.

One of the reasons it was so awesome is I had the great good fortune to met Phil Gutis. He’s a former New York Times reporter and current contributor, an Alzheimer’s advocate, and a man living with Alzheimer’s disease.

Phil was diagnosed three years ago, at age 54. As you’ll hear, he’s quite easily able to articulate his thoughts and feelings. And he’s generous enough to share them with us.

In explaining the work I do, I often say I don’t get to meet people on their best day. Because if things were going well, people wouldn’t need to know me–at least, not in a professional capacity.

I’m often explaining to care partners why something is happening, why their person is doing something, serving as a sort of interpreter or translator.

Phil Gutis Gives us the Inside Scoop

So to have the opportunity to talk with a person living with Alzheimer’s who’s so early in the process is huge. The vast majority of families I’ve worked with over the years didn’t have this opportunity because a diagnosis didn’t come as early for their person as it did for Phil.

Families were only able to look back and piece together as best they could when the changes started. Once they knew for sure there was problem, it was often too late to have an in-depth conversation with their person about so many of the things Phil and I discuss in this episode.

Things like the fine line between helping someone and creating learned dependence. And how we talk to people living with dementia. Things like why it’s important to have a strategy to manage the overwhelm that can lead to meltdowns.

I often talk about bringing “the Good Stuff”–that’s respect, kindness, love, empathy, and compassion. I say that’s so important because people living with dementia pick up on the energy we’re bringing very, very quickly. Depending on where they are in the process, it can be the thing they comprehend before our words even register. Phil validates that, too, as he shares an experience in an airport.

To Edit or Not?

One final note before we dive in to the episode, about how the show is made. Everything is recorded in advance. Then the recording is edited, in order to cut the parts where my dogs go loco when a squirrel zips by, and things like that. That’s also when I look to cut as many ums and uhs and other verbal tics as possible.

In this particular case, I felt like that left me in an ethical dilemma. Should I do my usual editing? Or would that give people the idea that I’m making Phil sound “better” than he is? I erred on the side of leaving us both unedited.

So, here, finally, is the inside scoop with Phil Gutis, a man living with Alzheimer’s.