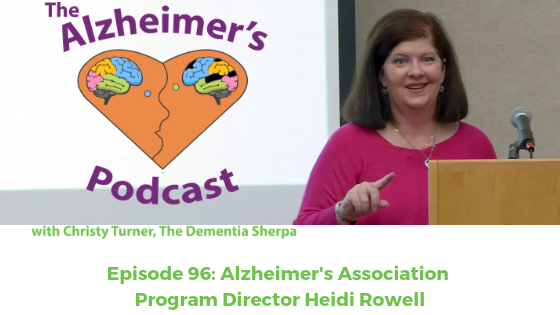 When you’ve been immersed in something–a subject, a community–for a very long time, it can become easy to forget that new people are learning about that subject or joining that community every day.

I think that’s often how it is in Dementia World when it comes to the Alzheimer’s Association. When I was on the dementia cruise and conference in April, I met a guy who wasn’t part of our group, who was on the cruise with his wife and the her professional care partner.

The man asked why the people in our group were wearing purple wristbands. Phil’s* husband, Tim, said, “They’re from the Alzheimer’s Association.”

That experience is a great reminder that no matter how obvious or ubiquitous something is (or we think it is), everyone starts out as a newbie at some point.

In this episode, Heidi shares:

*Note for Phil Phans: Phil Gutis, AKA The Assistant Sherpa, isn’t on the show this week. But we talk about him anyway, because Heidi’s a fan, too. Phil will be back next week.