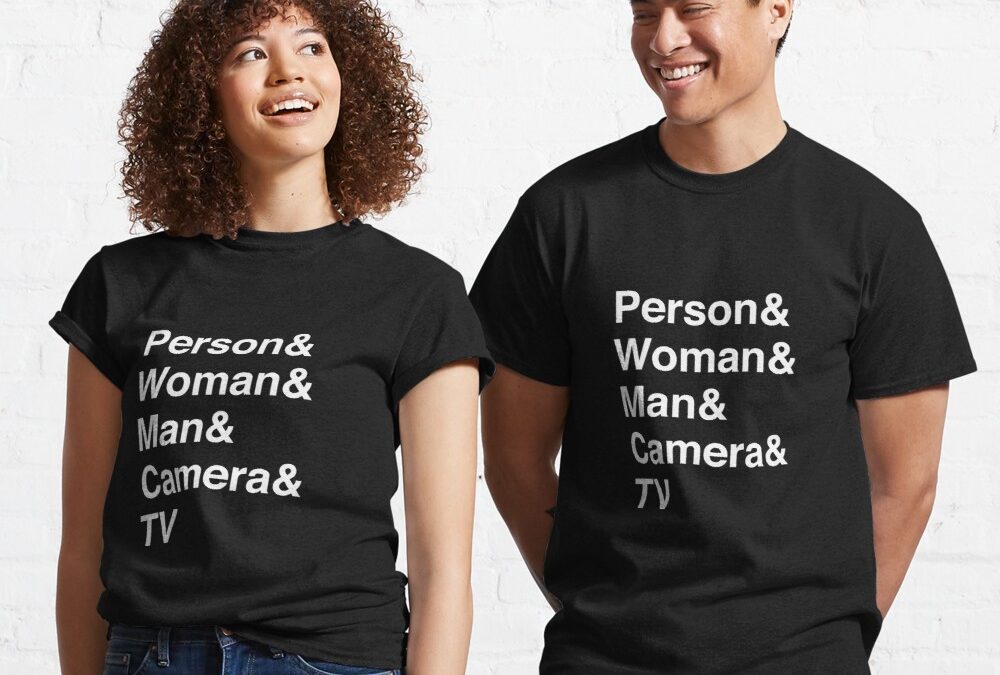 What’s He Talking About?

“Person-man-woman-camera-TV” By now, you’ve probably heard President Trump state that he “aced” a cognitive test. He went on to explain at length one component he encountered–recalling five objects–and added that, in his experience, “they get very hard, the last five questions.”

It’s widely assumed that the President is referring to the Montreal Cognitive Assessment test, although he has been unable to recall the name of the test he took.

Because of the attention cognitive testing is getting and the way it’s being talked about (there are “Person, man, woman, camera,TV” t-shirts now), I thought it would be helpful to take a deeper dive on the topic.

In this post, we’ll look at the variety of screening tools currently available and most widely used. We’ll also take a step back and cover why cognitive screening is important, as well as why how we talk about it is crucial for the future of every person living with a cognitive impairment.

One important note is that these cognitive “tests” are more accurately called screening tools. Depending on a particular tool’s sensitivity, a low score can show that further testing is indicated. That typically means an appointment with a primary care provider for lab tests and referral to a neurologist.

Still, many (most?) frail elderly people are simply given a diagnosis of dementia by their PCP and go no further with any testing or diagnostics. Families often rightly believe further testing would arrive at essentially the same conclusion and the benefit of knowing which specific kind is significantly outweighed by the difficulty of getting their person to a doctor.

How to Get Someone with Dementia to Go to the Doctor

True diagnostic testing is an in-depth process of exclusion, not a quick version of, “Repeat person, man, woman, camera,TV for me” instructions. Labs will often show untreated conditions that can mimic dementia symptoms. Whether a diagnosis of a neurodegenerative disorder is ultimately made or not, treatment of underlying conditions usually shows at least some improvement in symptoms.

A CT scan and/or MRI can either rule out or provide further evidence of a condition causing a neurodegenerative disorder. PET scans and fMRIs are more sensitive but more rarely used due to their expense. Most insurance does not cover either.

Neuropsychologists perform in-depth cognitive testing that can last anywhere from 4 to 8 hours and are able to make a more accurate and definitive diagnosis, such as Alzheimer’s disease or Lewy Body Syndrome, than a PCP. Unfortunately, however, people with frontotemporal degeneration (FTD) average at least 3 years of trying before finally receiving an accurate diagnosis.

You’ve no doubt heard all about the Montreal Cognitive Assessment (MoCA) by now. It’s widely used and probably about to get even more popular due to the publicity.

The first tool I ever administered is the Mini-Mental State Exam (MMSE) back in my days as a Social Services Director. (In contrast to “person, man, woman, camera,TV,” we commonly referred to the MMSE as the “apple, table, penny” screen.) At the time, I was working in a VA-contract skilled nursing facility and part of my job was to immediately administer the test when a new admission came into the building.

In practice, this meant I’d be asking someone who was usually not much more than 48-hours post-op and heavily medicated for pain to tell me where they were, what the address was, and so forth. I’m sorry to say the way the system usually operated was these veterans would be transferred from across town in Friday rush hour traffic. In those conditions, the trip could last almost two hours and usually meant further waiting for a missed dinner to be delivered to their new room.

My eighth question was, “What county are we in?” Without missing a beat, Lily replied, “Well, I’m not sure, because I think this building sits just about on the county line. So we could be in Washington County, or we could be in Multnomah County.”

Our building did in fact straddle the two. Lily’s answer was a crucial piece of evidence that helped me prove she’d been misplaced in memory care; she moved into assisted living shortly thereafter.

The MMSE fell out of vogue both for its shortcomings (well-educated native English speakers tend to do significantly better) and because it stopped being free. The company I worked for changed to the Mini-Cog, a much quicker screening tool that adjusts for native language and education level.

I like the quickness of it. In my experience, people get less annoyed the quicker the experience. And I’m a big fan just for the clock drawing component alone. Watching how someone decides to draw the clock and where the numbers go give a lot of information in a very short space of time. (People with stroke-related cognitive impairments lump the numbers all together on one side, for example.)

When I changed companies, I was introduced to the Brief Cognitive Rating Scale (BCRS), which remains my favorite tool. We used the BCRS with Global Deterioration Scale (GDS) in conjunction with the Physical Self-Maintenance Scale (Activities of Daily Living, or ADLs) and the Functional Assessment Staging Test (FAST) as part of our pre-admission assessment to determine where a person was in the disease process and what type and amount of assistance would be necessary to support them along the way.

I’ve always found the BCRS easy to use in a conversational way. This is a huge advantage when interacting with a person who’s had it with “feeling like a dummy” in a neurologist’s office after taking the MMSE–a complaint I’ve heard more times than I can count over the years.

The Saint Louis University Mental Status Examination for Detecting Mild Cognitive Impairment and Dementia (SLUMS) is widely used in the VA medical system. Because of that and the way President Trump described the difficulty of the last few questions, I figured this was the tool he was referring to.

I’ve used the SLUMS on numerous occasions as part of a locally-affiliated Alzheimer’s Foundation of America Memory Screening Day program. In my experience, people reported (and showed) the most difficulty with the last four questions.

What’s the Point of Screening?

As I’ve said ad nauseum about a condition that’s chronic, progressive, incurable, and fatal, it’s a very hard sell to get people to race to the doctor at the first sign something is amiss. People often erroneously think that means doing a “person, man, woman, camera,TV,” screen and that’s that. In other words, essentially pointless.

But getting to the doctor right away and starting the diagnostic process is still the very best way to handle it. The first step in the process is often a cognitive screening.

Let’s use Phil Gutis (our Assistant Sherpa on The Alzheimer’s Podcast) as an example. Because Phil took quick action, he was able to enroll in the Biogen trial for its new still-experimental-and-back-in-phase-III-trials drug aducanumab. In order to get into the trial, Phil went through the entire diagnostic process (on Biogen’s dime).

At age 54, he was diagnosed with young-onset Alzheimer’s disease. Obviously, no one wants to get that diagnosis, including Phil. But he’s also noted that there was some relief in getting it, because he finally had a name for his symptoms.

Getting the diagnosis when he did has also allowed Phil to think about–and discuss with his husband and sister and nephew and nieces–what he wants the rest of his life to look like. And perhaps most important to every human, it’s made autonomy possible.

Phil gets to be in control of making tough decisions now, rather than forcing his husband into making agonizing choices in the future.

So, What’s the Point of Shaming?

There’s been some question as to whether President Trump understands the implication of continuing to talk about his cognitive screen. (“Trump keeps boasting about passing a cognitive test — but it doesn’t mean what he thinks it does”.)

Folks have speculated for years about President Trump’s overall mental and cognitive health as the majority of the public searches for a logical explanation of his thinking, judgment, and decision-making. Those are legitimate concerns regarding anyone in a position of authority.

Is It Time for Intervention? Part 3: Changes in Usual Behavior

Is It Time for Help? Part 4: MORE Changes in Usual Behavior

Is It Time for Intervention? Part 5: Physical Changes

Is It Time for Intervention? Part 6: Cognitive Changes

But right now, it’s all culminating in a tsunami of “person, man, woman, camera,TV” mockery on social media specific perceived cognitive impairment. The word dementia is casually thrown around pejoratively. None of this is helpful for people living with a neurodegenerative disorder, whether they’ve been diagnosed or not.

Seriously, we have to get rid of the stigma and shame surrounding dementia and the diseases and conditions that cause it! We know early detection and treatment lead to the best quality of life outcomes.

Publicly ridiculing a person many believe has the condition is no way to persuade others to be proactive in seeking diagnostic testing. Being publicly shamed and derided is already the stuff of nightmares for people with perfectly healthy brains.

Imagine suspecting–fearing–you have a cognitive impairment. Everyone needs to understand the amount of courage it takes–as in, feeling the raw terror and doing it anyway–to seek a diagnosis for a condition that is chronic, progressive, incurable, and fatal.

If You’re Thinking, “Yes, But He’s the President!”

If President Trump does turn out to have some type of cognitive impairment, ridiculing him for it is cruel and the very antithesis of bringing The Good Stuff (what we in the Dementia Sherpa tribe call respect, kindness, love, empathy, and compassion).

None of this is to say people who hold elected office or otherwise hold positions of power shouldn’t be held accountable for their actions; of course they should. But that is a separate matter that will be decided November 3, 2020.

That's a long time to struggle with trial and error!