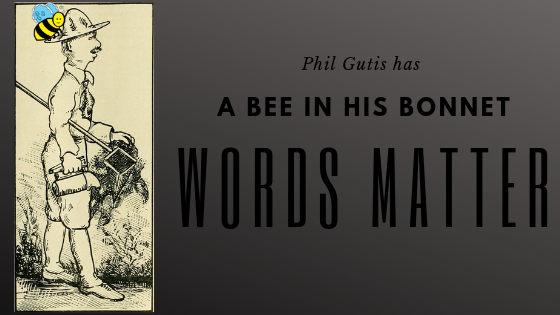 Phil Gutis and I recorded this conversation May 15, 2019, with the intention of making a new episode of The Alzheimer’s Podcast. Despite several attempts at getting rid of weird background noise, we weren’t successful.

But because this topic is so important--and as you’ll see, Phil is so passionate about it--I decided to make it a blog post. Unfortunately, that means it doesn’t capture the nuance of our back and forth. The good news is our conversation from the week before, which is more broadly about communication, will be released as Episode 94 on May 21st.

This transcript has been lightly edited for clarity.  -CT

Christy Turner: We were chatting a little bit before we started recording the show, and you said, “Words matter,” which I wholeheartedly agree with. And you said specifically the term dementia. Would you like to say more about that?

Phil Gutis: I hate that term. Didn’t occur to me until we were on our cruise [The Inaugural Building Bridges of Hope and Connecting Circles of Care Dementia Cruise & Conference] recently, [and] Peter Maeck told the poem about his [father’s] journey with Alzheimer’s.

And in this poem he talked about dementia and being demented. And I had one of those light bulb moments ’cause I hadn’t connected the two.

And I guess I could understand how–although I don’t necessarily accept this–even in late stage Alzheimer’s, somebody could be considered demented. But demented has such a negative connotation to it.

And I certainly don’t feel demented right now. And the vast majority of people I’ve met who have Alzheimer’s, some of whom are fairly [far] along on their journey, don’t strike me as demented.

And it seems like, it just seems like a really poor word to be using to describe a disease. It’s a very loaded word.

What's okay to say? What's not cool? Words Matter: The Dementia Sherpa's Guide to Dementia-Friendly & Preferred Language is a quick guide to help you figure it all out. It's hot off the press and ready for download!

Christy: So, dementia being the root word–when people say things like demented or dementing, I agree: those are both awful terms.

Dementia itself, as a term, is not used as a pejorative any more than cancer is. But I think when we’re talking about demented, I think that’s a different thing entirely.

Phil: You’re sitting there and using a term that is so close. I mean, I understand why people could say that somebody who suffers from dementia is demented.

We’re not demented–and it may just be that I don’t understand the definition of the word demented, but it strikes me almost as a lost your mind and negative, almost evil, connotation.

Christy: Yeah, I think it’s used pejoratively, for sure. And it would be great if it was eliminated.

Phil: Yeah. Yeah. So why do we choose Alzheimer’s and other dementias? Person with dementia? Why? Why is that? It used to be called senility, right?

Phil: It’s senility or–what did the the [Project] Lifesaver guy [Chief Saunders] say? Alzheimer’s used to be covered in an hour long presentation to police officers about retardation, right? Isn’t that what he said?

Christy: Yeah. He said that back then [20 years ago], intellectual disability was called mental retardation, and Alzheimer’s, or people living with dementia, were covered under a one hour law enforcement training class on “How to Recover Mentally Retarded People.” That’s what it was called for search and rescue operations.

Phil: So, obviously the term has evolved over the years–

Phil: –the term that the medical world or the community uses. So why did we land on dementia? Do you know?

Christy: I don’t. I don’t know. It’s a collection of symptoms. I guess my point being the word dementia is very different than calling someone demented.

Christy: Yeah, it is. Again, using cancer as an analogy. Can someone have cancer? Yes. Do we call them cancered? No.

Where calling somebody demented? I’ve done it. Maybe in the last week I’ve done it; I don’t know. You know, That idea is just demented, or, You’re nuts, you know? You’re just demented. Well….It’s an interesting thought.

Christy: So what’s an alternative that you think would be better, Phil?–

Phil: I have no idea.

Christy: –that would be inclusive of people with Alzheimer’s, and frontotemporal degeneration, and Lewy bodies and the whole gamut of things that cause dementia?

Phil: What do all those things have in common?

Phil: Well, no. Okay. So taking a step back, what are the group of symptoms that make up dementia? Memory loss, cognitive loss. Well…

Christy: It’s a wide collection of symptoms. So there–

Phil: So why aren’t we saying Alzheimer’s and other brain illnesses?

Christy: Probably the same reason that for many people, they have what’s commonly called a mental illness rather than a brain illness.

Christy: They’re not different. They happen in the brain, just like Alzheimer’s does.

Phil: Somebody could do an MRI and say, “He’s got depression”?

Christy: I couldn’t tell you if it would show up on an MRI; I have no idea. I’m not a medical doctor, but brain chemistry changes [in depression].

Christy: Selective Serotonin Reuptake Inhibitors. That all has to do with what happens in the brain, brain chemistry.

Christy: So the brain is no different than any other body part, in the sense of, I think it’s kind of weird that we make this distinction between mental illness and physical illness. Well, the brain is a physical part of our body. Right?

Phil: Mm hmm. I mean, heart disease. Why not brain disease, you know?

Phil: If it fits under brain illness or brain disease, what’s that over encompassing terminology that we could come up with that isn’t dementia?

Christy: We’ll wait for you to come up with the answer to that, Phil.

Phil: Am I being silly? Does this even matter in the least?

Christy: It matters to you.

Phil: Well, I know it matters to me, but I’m one person.

Christy: Yeah, I see more nuance in it, I think, than what you’re seeing. A different example is just kind of how we say things. For example, it’s okay to say that there are people of color, but you would not flip that phrase around to shorten [it], to start with the word color—

Christy: Yeah. That was just never going to come out of my mouth.

Phil: Well, that used to be–

Christy: It used to be acceptable to say that; I am old enough to remember when that was, when people would say that, and–

Christy: Yeah, I’m just not going to hop on board. I’m well aware I’m a white lady. Not doing it. Not going there. My larger point being, language evolves over time–

Christy: –to what people find acceptable, and what they don’t.

Christy: And right now, just so there’s no misunderstanding for any[one], using the word dementia is completely acceptable; not considered pejorative at all.

It refers to a collection of symptoms. The number one leading cause of dementia is Alzheimer’s disease. Currently, number two is Lewy bodies. So that’s considered acceptable.

Saying things like demented or dementing illness are not considered acceptable.

All of that said, Phil finds none of it acceptable. So I think everybody’s clear on that right now.

What's okay to say? What's not cool? Words Matter: The Dementia Sherpa's Guide to Dementia-Friendly & Preferred Language is a quick guide to help you figure it all out. It's hot off the press and ready for download!

Christy: I’m going to make an educated guess and say no one wants to be living with dementia. That everyone would like have perfect brain health.

Phil: Yeah, but you know what I’m saying.

Christy: Yeah, I do know what you mean. And again, I think there’s a massive difference between calling someone demented and saying someone is living with dementia. And that’s another evolution that has happened over time.

It’s always person living with or sometimes, when I shorten it, when I’m talking to care partners, I talk about your person. Because I don’t know, it could be your spouse, it could be maybe you all never got married. Maybe it’s your partner.

Maybe it’s your grandparent, your parent. I have a client who has a daughter with Alzheimer’s, so it could be a wide variety of connections. I don’t know what it is.

And certainly there are many professionals in the Dementia Sherpa tribe. So there’s also that, right? And so I say your person, and that’s who I’m talking about.

Phil: So I just realized that I’m attacking your Dementia Sherpa name, huh?

Christy: I would say yeah.

Phil: We could go in circles all day and we should probably stop. But, I’d be curious to hear if other folks have thoughts on this, some of our [readers].

Phil: Because I think I’m not going to give up. I think there is a subtle stigmatizing impact of [the] word dementia. And I woke up to it and I’d be very curious to see what other folks would have to say about it.

Phil Gutis is a former New York Times reporter and current contributor. He’s an Alzheimer’s advocate, serving on the Alzheimer’s Association National Early Stage Advisory Board. Phil, who frequently appears on The Alzheimer’s Podcast, likes the title “Assistant Sherpa.” If you have questions for Phil, a 57 year old man living with early onset Alzheimer’s disease, please let us know so he can answer in a future episode or blog. Email, or DM on Facebook or Twitter.