#102: Everybody Does the Best They Can 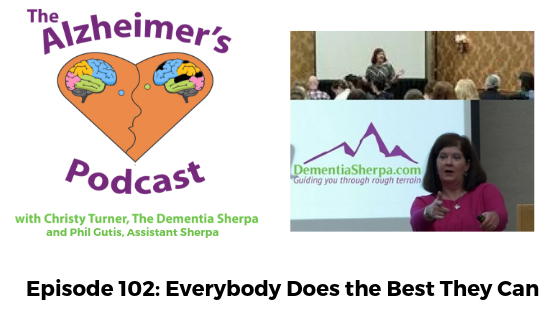 We start by answering a listener’s excellent question about the fine line between helping and creating learned dependency, which leads to Phil to talking about a symptom that you may not know is related to Alzheimer’s and a few other types of neurodegenerative disorders.

“She doesn’t remember that her husband has passed away and she’s always asking about him.”

Phil also tells about “doing a little bit of writing for…a website called the MemoryWell, where people are hired to write stories for folks who have dementia” and a situation he encountered related to that: “[She] is 94 and in a memory care facility. [Her daughter] was describing her mother’s life and how…she doesn’t remember that her husband has passed away and she’s always asking about him.” So we also discuss that situation and ways to handle it in this episode.