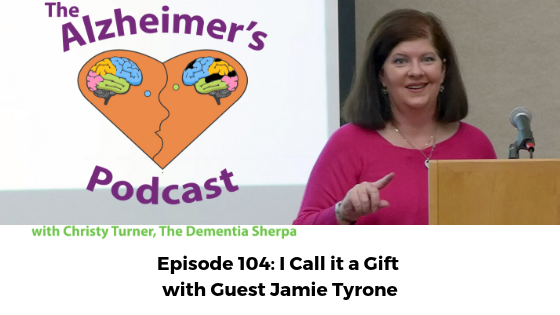 Several years ago, Jamie Tyrone was exhibiting symptoms of MS and given the diagnosis. But something still seemed amiss. She was determined to unravel the mystery, and that’s where we pick up Jamie’s remarkable and inspiring story in this episode.

A trained nurse and former marketing executive, Jamie’s now a full time advocate for Alzheimer’s research. She has two copies of the ApoE-4 gene, which puts her at a 91% lifetime risk of getting Alzheimer’s disease, along with 2% of the US population.

Jamie is the co-author a new book with Dr Marwan Sabbagh, Fighting for My Life: How to Thrive in the Shadow of Alzheimer’s.

She is also the CEO and founder of Beating Alzheimer’s by Embracing Science (B.A.B.E.S.), a nonprofit organization that raises funds and awareness for Alzheimer’s research.

In addition, Jamie is a founding member of Women Against Alzheimer’s and has contributed recommendations to the National Alzheimer’s Project Act Advisory Council.

Dementia can last 20+ years. That's a long time to fly by the seat of your pants, struggling through trial and error!