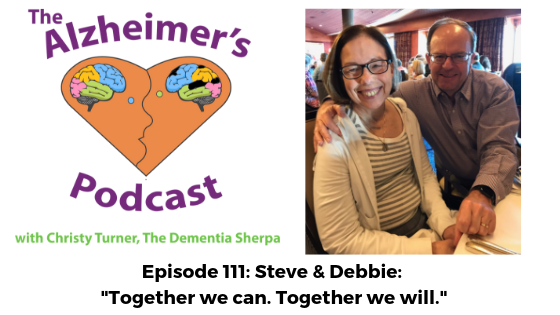 I was invited to be part of the speaker faculty for the Inaugural Connecting Circles of Care & Building Bridges of Hope Dementia Cruise & Conference this past April.

That’s where I met Phil Gutis, who became our Assistant Sherpa here on the show. And that’s also where I had the great good fortune of meeting Steve & Debbie Giblin.

Steve is Debbie’s husband and care partner. He was an inspiration to every care partner I talked to. Debbie has a smile that lights up a room. She’s living with a diagnosis of Posterior Cortical Atrophy, or PCA for short.

According to the Alzheimer’s Association, “It is not known whether posterior cortical atrophy is a unique disease or a possible variant form of Alzheimer’s disease.”

Debbie has given permission for Steve to talk about her particular diagnosis because it’s something that most people haven’t heard of before…including the professionals she sought out for help with her first symptoms.