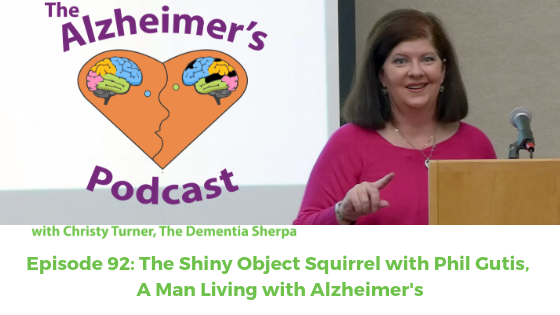 Welcome to Episode 92 of The Alzheimer’s Podcast, where we’re all about bringing The Good Stuff (that’s respect, kindness, love, empathy, and compassion) for people living with dementia, their families, and the professionals who support them. I’m Christy Turner, AKA The Dementia Sherpa. I’ve enjoyed the privilege of working with over 1,500 people living with dementia and their families so far, including multiple experiences in my own family.

Hello and welcome! I’m thrilled to bring Phil Gutis back to the show. Phil is a former New York Times reporter and current contributor, an Alzheimer’s advocate, and a man living with Alzheimer’s disease.

Phil was diagnosed three years ago, at age 54. I first introduced you to him on episode 90. He was a hit, of course, and that episode gained some traction and attention online. And the reason I’m bringing all that up is there’s something I’d like to clarify.

Nipping Fake News in the Bud

In one of the comments I saw, someone said something along the lines of, “At his young age, it’s probably not Alzheimer’s. It’s probably Lyme disease.” So, a couple of things about that.

One, and this is a handy rule of thumb for everyone so you can check things out for yourself no matter what the topic is, is if you see something like that, click through to the poster’s profile. Does this person seem qualified to offer an opinion on this topic? Does this person appear to have expertise on this topic?

That said, there was actually a good point in the post. People in their early 50s who are showing signs of neurodegeneration can definitely be misdiagnosed. For example, the majority of people with frontotemporal degeneration, or FTD, are in their 40s or 50s and are initially misdiagnosed. It takes 3 years, on average, to arrive at the correct diagnosis.

Now, finally, about Phil in particular. He participated in the Biogen study, which was testing a new drug for Alzheimer’s. In order to participate in that study, he needed to get an accurate diagnosis.

He didn’t have a diagnosis when he first called about the study. So he was put through every test, multiple times. PET scan imaging is the gold standard for detecting Alzheimer’s disease. It’s better than an MRI. Insurance does not typically pay for PET scans; too many insurances balk at even MRIs. Phil’s had both, on more than one occasion. He definitely has Alzheimer’s disease.

Now that we got that bee out of my bonnet, let’s get to episode 92. I love this episode. Phil again gives us great insight into what it’s like to be a person living with Alzheimer’s disease.

Our conversation ranged from the first signs to how challenging it can be to complete a task when what Phil calls the Shiny Object Squirrel shows up.

We also discuss awkward conversations with strangers, and in what I consider a happy accident, we landed on the hot topic of showering. So many care partners seem locked in a struggle with their person over showering.

The best resource that I know of on the topic, a DVD called Bathing Without a Battle, is aptly named. As you listen to Phil talk about this, think about where your person is in the disease process and how able they are to express their own feelings on the topic. Then remember Phil was diagnosed just three years ago.

One final note before we get the show on the road: if you have questions for Phil, please let us know. He’ll answer them on an upcoming show. You can send them to me via email, Facebook, or Twitter. All those links are in the show notes at DementiaSherpa.com/episode92.