#149: “What worries me most is the psychological impact” 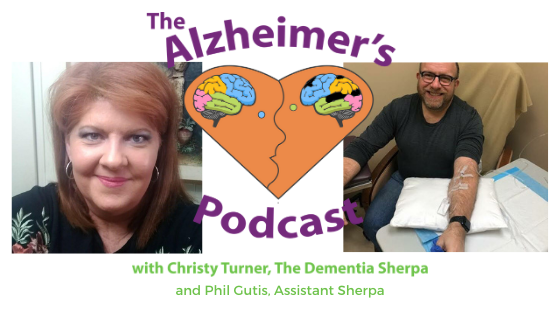 We’re picking up where we left off in episode 148: “I felt I had been harmed” with guest Jamie Tyrone.

Jamie is the author of Fighting for My Life: How to thrive in the shadow of Alzheimer’s. She first appeared on the pod in June 2019 in episode 100: “Enjoy us in the moment.” The second part of that conversation is featured in episode 104: “I call it a gift.”

In those episodes, Jamie talks about care partnering experiences and how she came to write her book Fighting for My Life: How to thrive in the shadow of Alzheimer’s, plus reveals how she unexpectedly found out about her risk of developing Alzheimer’s disease in the course of genetic testing for something else. As you can imagine, that had a significant impact on her life.

More about that in a minute. Meanwhile, fast-forward to February 2021. Phil Gutis, who is our Assistant Sherpa on the show and was diagnosed with young onset Alzheier’s five years ago, landed us an interview with Dr Jason Karlawish, who is both Co-Director of the Penn Memory Center and part of Phil’s neurology team.

Dr Karlawish came on the pod to discuss his new book The Problem of Alzheimer’s: How Science, Culture, and Politics Turned a Rare Disease into a Crisis and What We Can Do About It. That conversation, featured in episodes 146: “It’s a disease of autonomy” and 147: Safe, Social, and Engaged covered a lot of ground, as the title of the book suggests it would.

But three things in particular have continued to stay on my mind: the impact of anti-Semitism on Alzheimer’s disease research; how we as a society treat people living with cognitive impairment, which never really leaves my mind; and the idea of creating a new diagnosis called “pre-clinical Alzheimer’s.”

Now, back to Jamie Tyrone. She’s been living with the information she has a significantly high risk of developing Alzheimer’s disease for 11 years now. So of course we wanted to hear her thoughts on this idea of a “pre-clinical Alzheimer’s” diagnosis. Jamie does a terrific job explaining what that might entail and recapping her experience in episode 148: “I felt I had been harmed.”

So, if you haven’t listened to that episode yet, I recommend you go back and do that now before listening to this episode. Then come back to this episode, in which Phil and I have a conversation with Jamie about the psychological impact of genetic testing and knowing you have a diagnosis or are at a significantly higher chance of eventually getting the dreaded diagnosis.

The conversation got more real and raw than any of us anticipated … and I think it’s both a conversation worth listening to, and then having in real life with the people you care about.

Affiliate disclosure: As an Amazon Associate I earn a small commission from qualifying purchases, at no/zero/none/nada additional cost to you. If you've heard/read/seen something helpful on The Alzheimer's Podcast or the Dementia Sherpa blog or YouTube channel, purchasing through the links on this page is a way to show support---thank you!).

Christy Turner is a speaker and consultant, host of The Alzheimer’s Podcast, founder of DementiaSherpa.com, and creator of several online programs. She’s enjoyed the privilege of working with over 1,500 people living with dementia and their families so far, including multiple experiences in her own family.